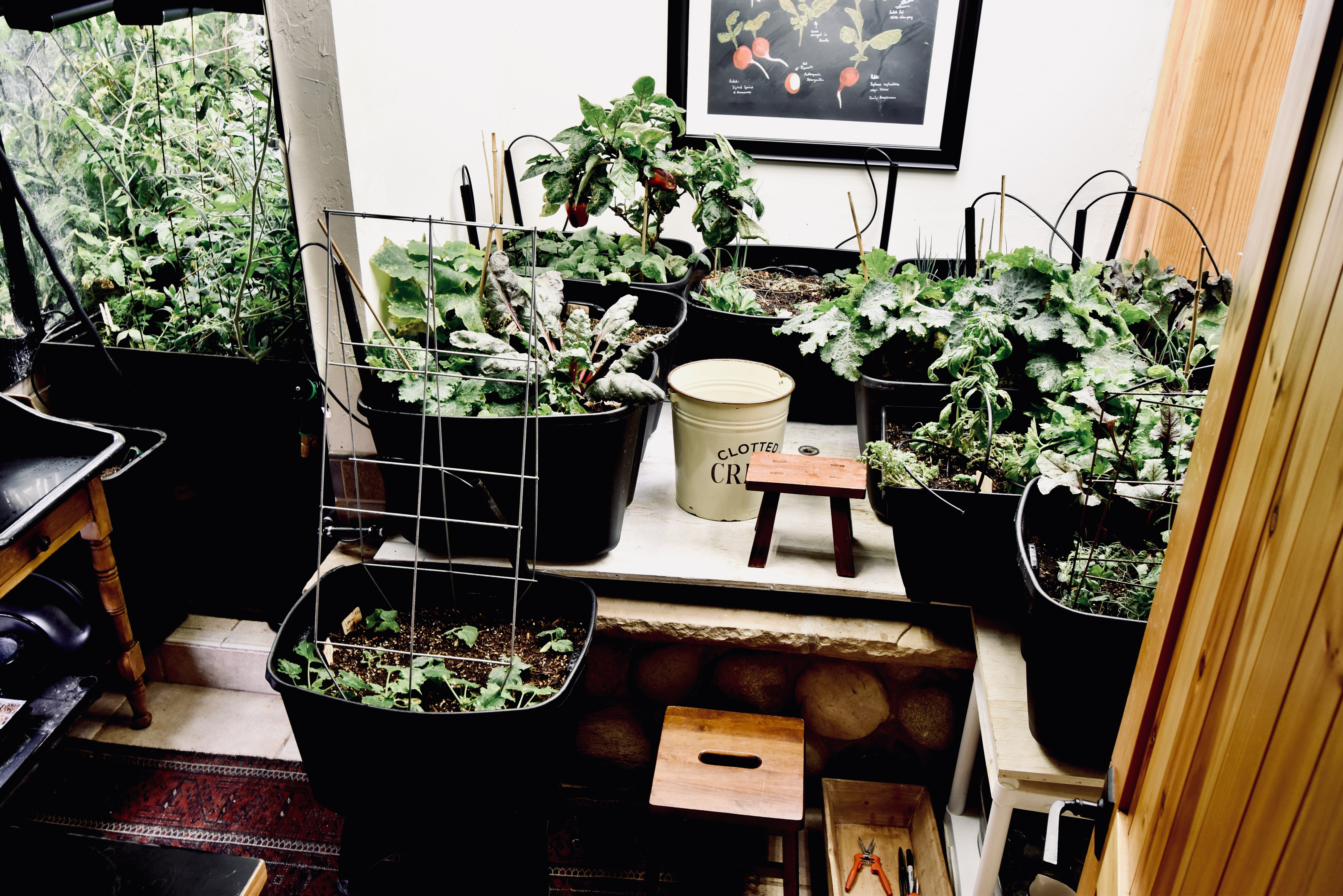 I know it’s been a while, but hey, It’s June in the Rockies and it’s beautiful outside! I am too busy gardening outdoors, like all of the “normal” gardeners who garden outside, to be bothered much with my indoor garden! And heck, I’ve been letting it go on auto-pilot for almost 6 months, so why stop now?

But here’s an update anyway, to keep you following along… Currently in our little indoor, bathroom-garden we are growing peas, tomatoes, cauliflowers, squash, zucchini, two rutabagas (rutabagi?), a few herbs and even some flowers. Plus, a whole heap-load of carrots.

So let’s get started!

Growing Tomatoes, Indoors and Out.

The tomatoes I had been growing indoors for three years were getting “hardened off” for their exciting trip outside. In fact, this particular tomato plant had lived its entire three years of life indoors, in a state of constant summer, and was starting to slow down a bit in the fruit production department.

I planned to take it outside for a final summer, out under the real sun, to see what it would do. Would it pick up its tomato production again? Would it dry out and topple over because it wasn’t used to the heat? Or would it just explode from the sheer power of the sun? I was curious.

So, very diligently I started hardening it off. I’m sure you know this already, but “hardening off” is the process of acclimating your indoor plants to the outdoor environment. It’s done in order to lessen the shock of taking the poor plant outside without a jacket or a night-light or anything. It’s done typically with indoor seedlings ready for planting in the garden. So we hardened the Old Tomato plant off the same way.

Except it was super heavy. Because instead of being a cute little 6″ seedling, it was a full grown, three year-old, indeterminate tomato plant. Which is kind of hilarious to carry anywhere.

So I brought this big bucketful of tomato plant inside and outside every day. First for a few hours. Then a whole afternoon. Next, for the whole day. Then a few days in a row.

And then we hardened it right off into being dead. Because of course, the first night we decided to leave it out for the whole night, it got down to 31 degrees and that was that. Frozen Dead. The kind from which there is no coming back. Ah, June in the Rockies.

But, we’re never ones to worry too much over one plant. We had a bunch of tomato seedlings ready to call up in its stead. Little seedlings that we had grown in our indoor seed starting station in the Tub Garden. Because they were smaller, they would have been much easier to harden off.

Except we forgot to harden them off, and we just up and planted them in the community garden with no preparation whatsoever. I don’t think we even talked to them about what we were doing.

And somehow, two weeks later, they are still alive and looking pretty good!

Meanwhile…indoors, we have switched the entire tomato crew here over to Determinate Tomatoes. This seems like it is going to be a much more civilized way to grow indoor tomatoes. I am sick of them reaching the ceiling and taking over entire corners of the garden. But I still want tomatoes. So we are trialing a whole heap of determinate varieties right now.

The ones I am most excited about are the San Marzano tomatoes. They should end up pretty tasty. They are a Roma tomato variety that is delicious in sauces – such as my favorite, spaghetti bolognese. Mmm-mm, can’t wait.

Growing Cauliflower Indoors. I May Be Over It.

We have been growing several of what I call “sexy” cauliflower varieties here in the Tub Garden. The cheese varieties that are slightly orange-colored and taste really velvety, plus the cool, green, fractal-looking cauliflowers which are called Romanescos.

The cheddar cheesy cauliflowers have been growing really well. The green Romansecos, less so. Their heads just aren’t coming together into a formed, compact, head. I haven’t tasted them yet either. But the orange, cheesy ones we have tasted and they are crazy! They taste cheesy! I don’t know if it’s just an optical illusion that tricks my brain into thinking they taste cheesy, but they’re really yummy and rather exciting. Well, for cauliflowers, anyway.

I am done with growing cauliflower in the indoor garden, once this group is harvested. And I’m done with broccoli too. At least for a little while. These plants take up too much room and they are extremely thirsty, drying out their containers everyday. So, anything you plant in the same container gets the water sucked away.

Forget it, I say. Let’s just spend the $0.90 it takes to buy a nice, formed-head of broccoli at the grocery store. Instead of waiting the months and months it takes for these to grow. The actual plant ends up being nearly three feet wide, and you get like a cup of cauliflower when its all done.

We did have some fun cooking up Ina Garten’s Cauliflower Au Gratin with half store-bought cauliflower, and half cheesy, indoor garden cauliflowers. You can see the size comparison – almost everything grown in the indoor garden ends up a little smaller than the gigantic, visually perfect specimens you can buy in the store. And you can definitely see the cheesy color difference. Of course the Au Gratin ended up delicious, because it was an Ina Garten recipe. But I am convinced it was even more delicious because of that extra velvety, cheesy indoor-grown cauliflower!

Well, we had a big ‘ol crop of juicy beets…but then they got spider mites. So I pulled them up and we’ve started over with seedlings again. No garden is perfect. Not even an indoor garden, where you can control all the variables.

I have a neighbor who specializes in growing marijuana indoors, so one of these days I’m going to ask him what the pros do to keep the spider mites at bay. I hate those guys. (Spider mites, not marijuana growers.) They’re so gross and they make your plants look so pathetic. I usually try to spray them off with water, then neem oil, if needed. But I just didn’t feel like dealing with it, so I yanked those lil’ beets out of the garden and we were done with them. Next!

In contrast, the two rutabagas are cranking right along. I think they’ve been growing for more than 100 days, so they’ll probably be ready soon-ish? Some vegetables just take longer in the artificial environment.

And then there’s the thousand carrots my 6 year-old son, very enthusiastically, direct sowed. They are starting to grow into a terrifying carrot forest. We shall see how the actual roots look in a few weeks when we start pulling them up.

Previously, we had started our indoor carrot seeds in starter trays, and then transplanted them. We ended up with some very delicious, but very ugly carrots. I wasn’t sure if this was just because they were grown indoors, not under the real sun, or what. Our carrots which were grown outside, in contrast, were straight and gorgeous. So, we thought we would try direct seeding the carrots instead, because that was one obvious difference in how we grew those straight, lovely, outdoor carrots.

And then, because I have been a bit less rigorous with my scientific method lately, I let my son help me direct sow them. And if you’ve ever given several hundred teeny, tiny, seeds to a teeny, tiny boy…you may know that you end up with a hundred seeds plopped into about one square inch. More to come on how this experiment goes.

I keep trying to make my lovely little kitchen herb garden grow. But then the herbs keep getting too close to the window and freezing at night. Especially the cilantro. So, I have carved out a space in the Tub Garden for some herbs. The container is full-to-popping with one rosemary plant, two tiny basils, and like 55 cilantro plants. I love cilantro.

And The Rest of the Indoor Garden…

Finally, we also have some lovely zucchini and squash plants growing. There are some ok-looking peas that are making a few, rather bloated pea-pods and I’m not quite sure why they don’t like that spot. There’s a pepper plant that is going gangbusters in the corner where I keep forgetting he is, and we’re also rounding our fourth or fifth try on artichokes. We haven’t gotten those to do much of anything in the indoors yet.

So that’s it for this quickie, spring garden update for the Tub Garden. Our slightly crazy, mostly cool, indoor gardening experiment. We’ll see you next quarter!

Like me, I hope you’ll enjoy gardening in the outdoors all summer, like normal people do. And then we’ll catch up with you again when the frost starts to kill everything and you suddenly wish you had a safe, cozy place, where the sun always shines, to keep those little plants going…. a place like the Tub Garden!

October 24, 2022Advanced String Theory. Trying out the “Lower And Lean” Method in an Indoor Garden.
Even though I am a physician, and I was a chemistry major …
March 9, 2022Indoor Garden Spring Update. Why Can’t We Just Have Whirled Peas?
Its mid-March here in the mountains, and we're about two weeks into …