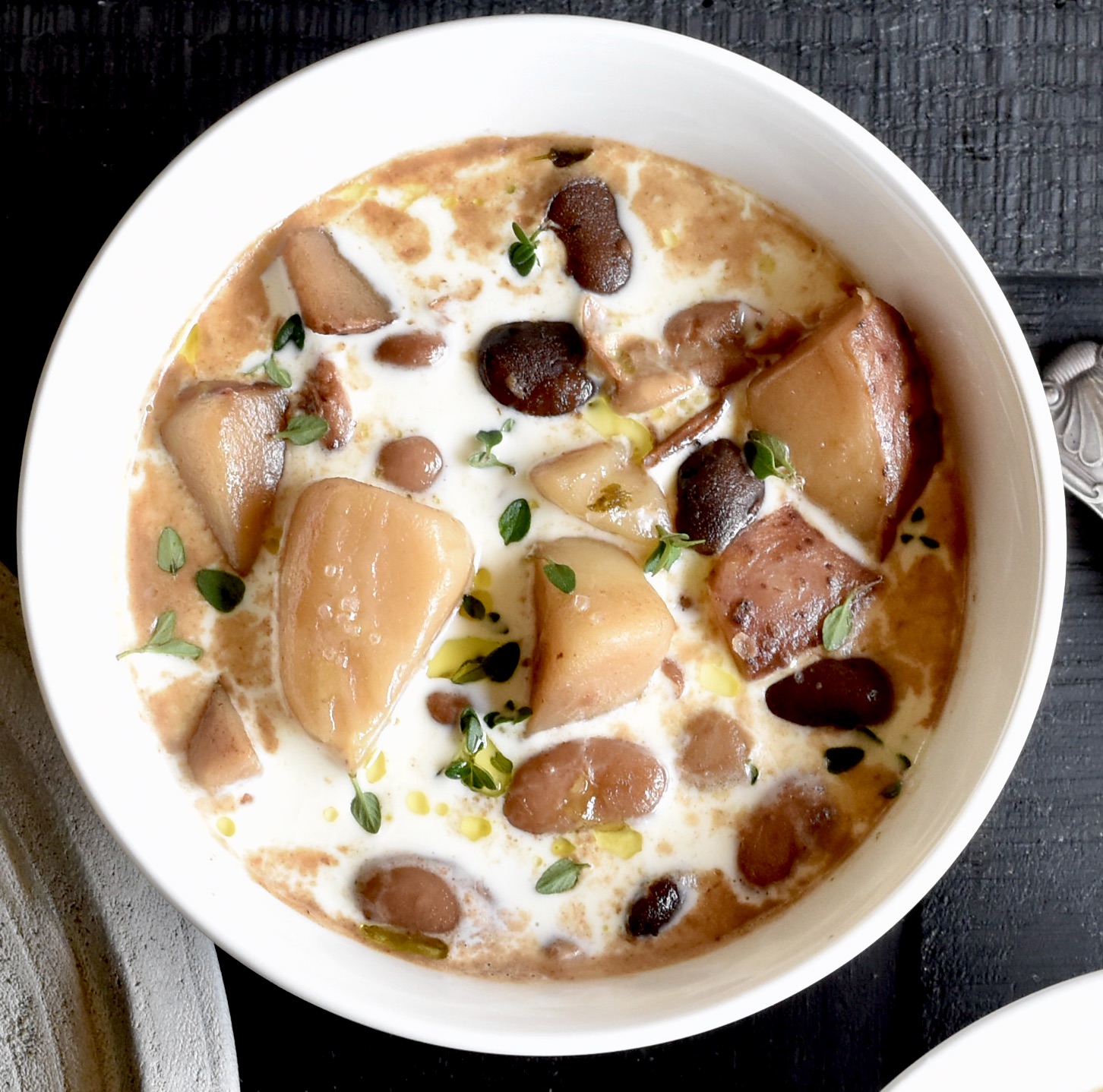 There I said it. Let’s just get it right out of the way. The elephant in the room, when it comes to bean recipes, is the fart situation. I am one of those people who sees “beans” and thinks “toots”. I’m pretty sure it all goes back to a friend I had in college who turned vegetarian halfway through junior year. The next thing we knew, he was eating beans by the poundful and suddenly unbearable to be around. It ruined me on beans, sadly. Actually it ruined me on vegetarians, too, now that I think about it.

I was happy to never eat beans again. Until last week. Because somehow along the way, I have also turned into a vegetarian. And much more importantly, because a package of magical beans showed up on my doorstop. Like something out of a fairytale.

The magical beans were from a company called Rancho Gordo, and sent to us by my sister-in-law. They really highlight what a difference “fancy” beans can make in a recipe. As soon as I opened the box, I was impressed by the unusual colors and sizes. There isn’t anything like these at the normal grocery stores. That’s because these aren’t just ordinary beans…they are heirloom beans. They look like they might just grow a giant beanstalk, plus or minus a golden goose at the top.

Naturally I started perusing heirloom bean recipes right away, because I hadn’t cooked much with beans since those traumatic experiences in college. I fortified myself to the fact that, after all these years of marriage, my husband was going to have to find out that I own a pair of intestines. I threw myself headlong into all things “bean”, and found there were so many gorgeous things to try. French cassoulets, Pasta e Fagioli, white bean stews, and hearty chili recipes. Here was a whole world of flavors I had completely turned my back to.

The one recipe that really caught my eye was a little beauty from Bon Appetit, their Brothy Heirloom Beans with Cream Recipe. It was so pretty, so elegant-looking that I thought, surely, only sophisticated people eat this. So if we make it, and we toot, our toots will be Bon Appetit-approved. After trying it out a few times, my husband joked that I am becoming my own test kitchen. We eventually made a few tweaks, but the idea of this soup remains mostly unchanged. This heirloom bean soup recipe lets the deep, rich broth created by those unique beans shine. The beans are the backbone and also the main event. It really is a celebration of bean flavor.

What makes a bean an heirloom bean? Or an heirloom tomato, or any other heirloom seed, for that matter? Well, it’s actually not that simple. The definition and use of the word heirloom can be hotly debated in the seed communities. Here are the criteria that seem to matter most.

These classifications aren’t just for snooty seed historians, though. This is actually pretty important stuff. Before the industrialization of agriculture, there was much more diversity in the plant varieties grown for food. Small farms and home gardeners saved seeds, traded seeds, and had seed catalogs which promoted diversity and sharing. Once industrialization took over, only certain varieties were grown in large, single-crop plots. The “best” varieties were made to be as consistent and efficient as possible for their geographic areas. However, with climate change, some of these crops may no longer perform as well in their areas. We will need the old biological diversity we used to have, that large catalog of seeds we used to enjoy, to save what may grow and become valuable in this ever-changing world.

So even though this article started off being about farts, it’s actually about feeding the world. See how sophisticated beans and Bon Appetit-approved toots can be?

But since I did bring farts up again, it’s time to address the two burning questions I had about these beans, the minute I had opened the box.

1. What about the awkward “toot” factor?

Yeah, I am concerned about this. I probably shouldn’t be, but I am. I’d like to at least know why it happens, and see what we can do to make this less of a “thing”. Time-honored home remedies include peppermint, cloves, anise, chamomile and ginger. Chef Jamie Oliver states, “Something that’s always worked for me is a delicious herb called summer or winter savory, which stops you being windy. Pop a little in the pan when you make some beans.” Great advice, Chef, and certainly better than lacing the dish with a drizzling of Beano.

The reason beans cause gas is because they have a high amount of the oligosaccharide raffinose, which is also found in cabbage, brussel sprouts, broccoli, asparagus, and many other vegetables and grains. This carbohydrate passes, unscathed, through the stomach and small intestine. Then, when it gets to the large intestine, bacteria start to ferment it. This produces carbon dioxide and hydrogen, two gases which ultimate end up coming out as toots. At Rancho Gardo, they very humorously, call this a “gift with purchase”. They suggest that soaking the beans in water, and then changing that water, could help decrease the amount of oligosaccharides and therefore could help with the gas factor pretty significantly.

Another point the Rancho Gordo FAQ section makes, is that we should make a small portion of beans become part of our everyday lives. This will certainly protect us from some of the “unpleasantness” that comes with tucking-in to a whole, huge pile of beans without getting your intestines in to shape first.

They also say that as Americans, we should just kind of get over it. Steve Sando (the founder of Rancho Gordo) states that, “In Mexico and India, and other legume-eating countries, [they] don’t seem to be as obsessed about it as we are.” Fair enough.

So I guess I should embrace beans, not avoid them. They are such a wonderful source of protein and fiber, which can be hard to come across in a life without meat. Plus, now that we are vegetarians, everyone probably expects us to be tooting up a storm anyway.

This article has mostly been about the “Table” side of things so far, the eating and preparing beans. So now let’s get into the “Tub” stuff, the planting and gardening side! Which brings me to the second burning question I had for the Rancho Gordo beans company.

2. Can I plant these magical beans? And, more specifically, can I grow them in my indoor garden?

The answer to the first one, is that you can certainly try, and many people have had success with it. The company itself offers this disclaimer, “We sell the beans as food, and while you can plant them and have great success in the garden, we make no guarantees about germination and we can’t offer any support in growing them.” There is a Facegroup page called “Ranch Gordo Bean Buddies” which offers some support in this endeavor. But mostly it’s about the celebration of all things bean-related. And also very little about farts.

As far as I can tell, no one has planted these yet in a completely indoor garden like our Tub Garden. So, of course, in the name of science and gardening, we are giving these beauties a try here! We planted two sets each, of the Cranberry Beans, the Black Beans and the dark and mysterious Ayocote Morado beans. We also planted a little summer savory to go alongside. For “windiness”. Might as well give it a try. We will give these magical beans the indoor growing treatment, and let you know how they do. Whether they do, or do not germinate, we’ll update this post!

Here in the gardening section of this article, I also have to mention that along with the beans, thyme is an unexpected star of this delicious heirloom bean soup recipe. The thyme really lends a light and pleasant counterpoint to those very hearty beans. As something we did actually grow in the garden, I am happy to celebrate it. I guess I am happy to celebrate all herbs, and all things, that are willing to grow in our little indoor garden. And hopefully one day soon I’ll be celebrating my own collection of Tub Grown heirloom beans.

So if you can, get someone in your life to send you a package of heirloom beans. Or send them to someone you love. Because it’s not necessarily the gift of flatulence, like you might think. Instead it can be the gift of a surprisingly hearty broth, unlike any other broth you’ll encounter. And, just maybe, those beans will be the real gift that keeps on giving, because maybe they will grow and produce more amazing heirloom beans for generations to come.

I never knew the rest of that famous children’s rhyme until researching for this article…but I think it’s perfect.

Curry Carrot Soup. Because these are not pretty carrots.