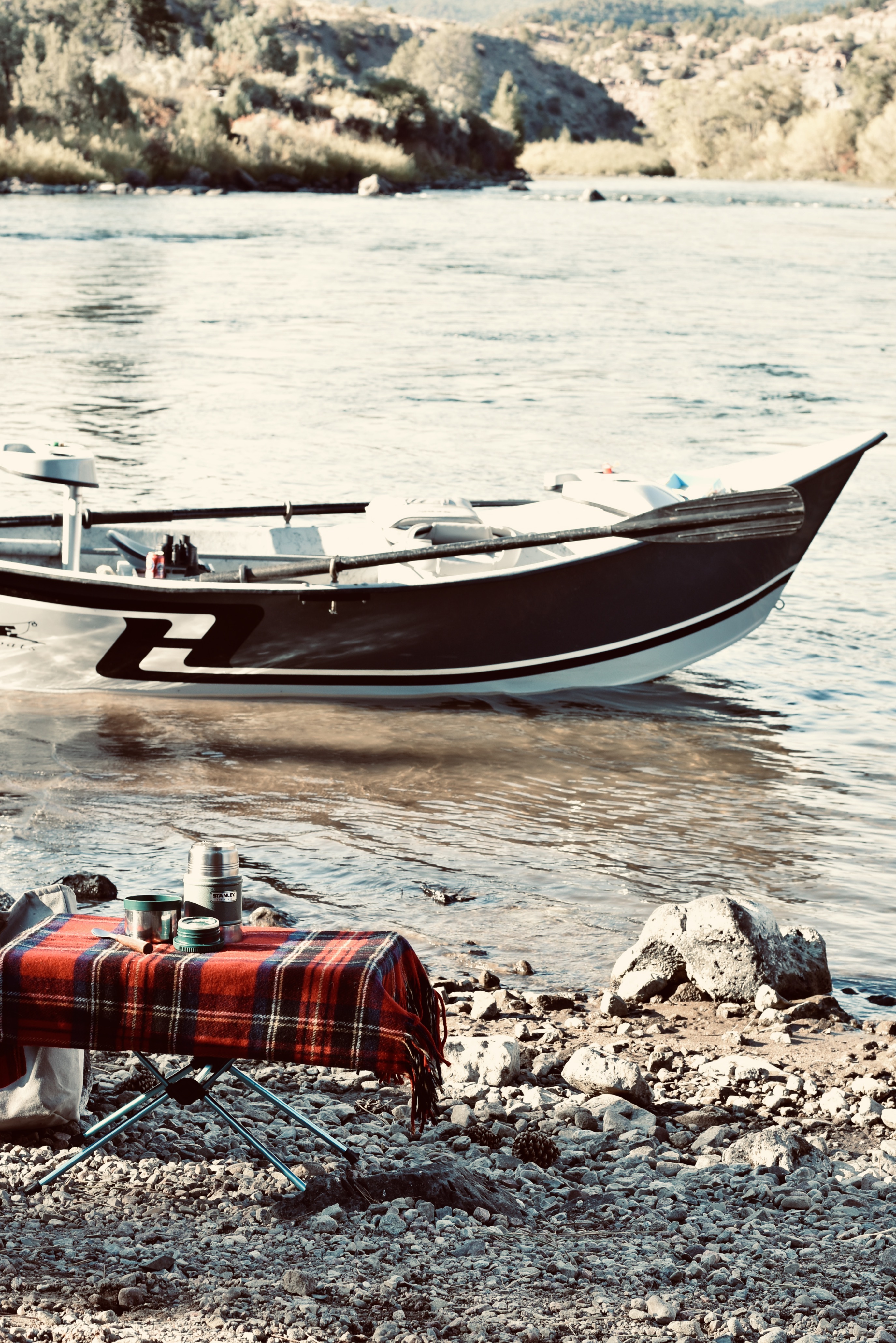 Have you ever eaten radish soup? I’m betting that if the answer is yes, you have a gardener in your life. Because who else would think of making radish soup, other than someone with a pound of radishes in their kitchen from overactive gardening?

Next, have you ever eaten radish soup on the banks of a river? If you answer yes to that one, well then…you might be a fishing, gardening, recipe-loving yahoo like me. So let’s get started.

Guess what? Radish soup actually travels really well. It is super hearty and is a surprisingly delicious way to get rid of that pile of radishes sitting on your kitchen counter. Now that I’ve discovered it, the possibilities seem endless. Football tailgating, potlucks, picnics, camping trips. Radish soup is coming along to all of those now.

You can use it for any season, because it can be enjoyed hot and cozy, or it can be served cold, like a gazpacho. We tried making it both ways, and both were quite nice.

We had the perfect chance to test its portability last weekend when we brought it along fishing.

We spent almost the entire day out in the sun and the wind, fishing from the boat and playing cards on the river-side beach campsites. This beautiful, pink radish soup ended up being a perfectly easy meal. We enjoyed it warm, right on the banks of the river. I even brought a little of the chimichurri sauce to garnish it. So very civilized.

Radishes, as I have posted previously, are fairly easy to grow so it’s nice to have a few growing at all times. Especially when the indoor Tub Garden starts doing weird stuff that I don’t understand, radishes are the ultimate confidence booster.

It just happened that a whole heap of radishes were overdue to be harvested from both the outdoor community garden and the indoor Tub Garden at the same time. This was more sheer volume of radishes than we’d ever had to deal with before. It looked like a stomach-ache-waiting-to-happen, that countertop full of radishes. I didn’t think we would survive eating them all raw. But I would hate to let them go to waste.

So, I looked up what you could do with a pound of radishes. And several versions of radish soup recipes came up. Some were served hot, some cold. Some were made with the radish greens for a nice green color and some were clear broth-based. But it was the pale pink ones I liked best of all.

The following recipe (which we tried both hot and cold) is a mash-up of my favorite two. One is a hot soup, the Red Radish Soup recipe from the Old Farmer’s Almanac and one is a cold version, Rachel Ray’s Creamy Radish Soup with Radish Greens Pistou. These radish soup recipes still work well even if your radishes are a little overdue and have turned bitter. Because when you cook them, they mellow considerably, allowing just that nice radish-y, earthy flavor to stand out.

Rachel Ray’s cold version is very pretty and delicate looking, due to that lovely radish green drizzle contrasting with the pale pink of the soup. Traditionally made with garlic, fresh basil, and olive oil, that drizzle is known as a pistou. But I wanted to serve our soup hot, so we decided to also add some chopped parsley and red wine vinegar to our radish green sauce. It turned ours into more of a chimichurri. The tang of the red wine vinegar stood out nicely against the savory, hot soup.

I cooked it the night before our river trip so it was all ready to go in the morning. The whole house smelled delicious while it was simmering. And the color! That light, delicate pink is such an unexpected color for a hot soup that isn’t sweet. It was so oddly elegant, served on our camping table. We felt like we were in a Grey Poupon commercial.

I don’t think radish soup is something that even I would have tried before starting up the Tub Garden. Radishes have never really been a huge eating priority in my life, at least not to the point where I would think about turning them into a soup. But, when life gives you radishes, you could try to make radish-ade. Or, even better, and slightly less crazy, you could make radish soup.

This lovely pink soup gets even pinker the more radish skins you use.