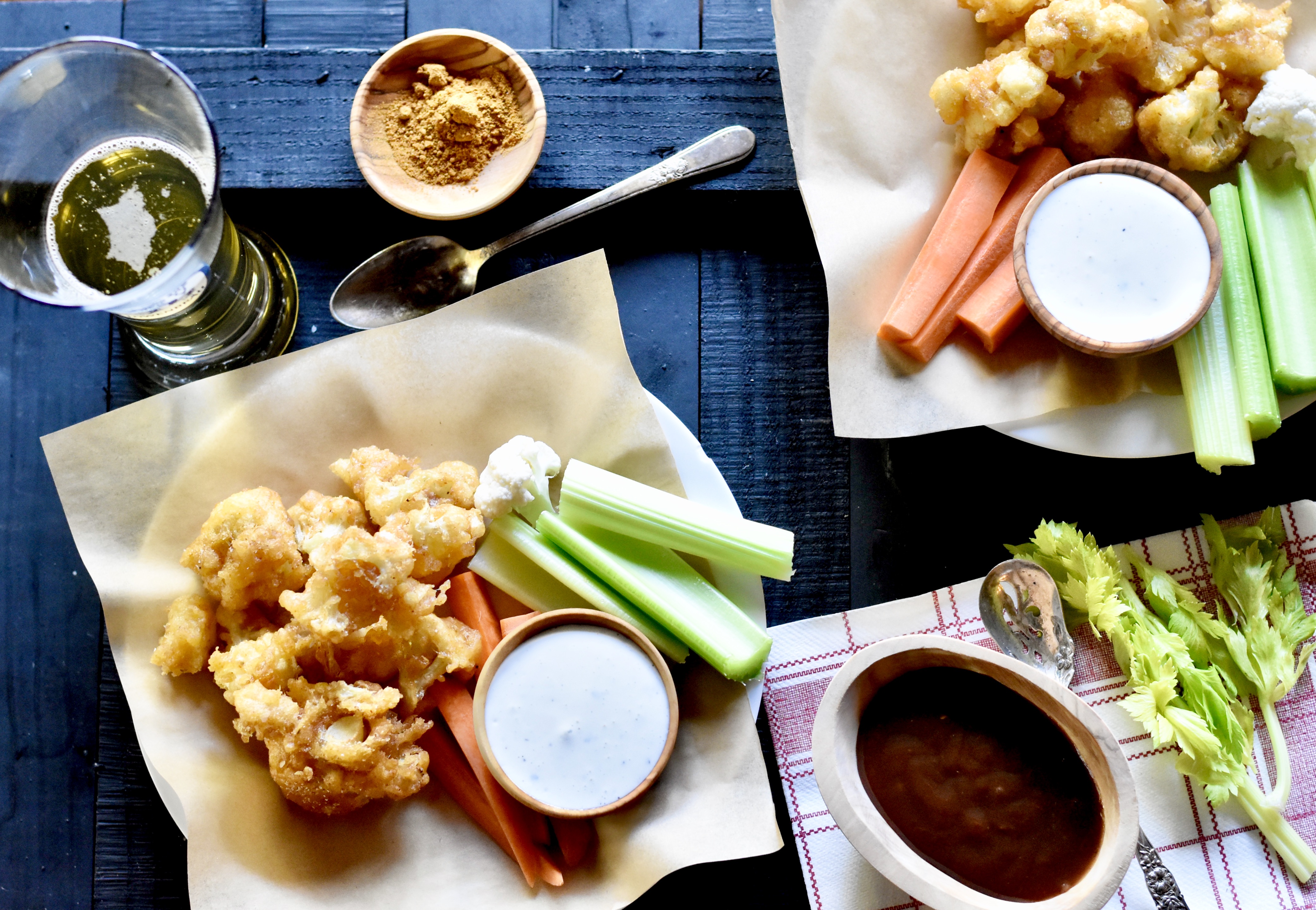 After months and months of waiting, 115 days to be exact, my cauliflower heads were ready. At long last.

I had planted these seeds in early May. They grew slowly and steadily for about 4 months. Beets, radishes and several crops of lettuce went in and out next to them. They just grew steadily, their heads looking small and loose for the longest time. Their large blue-green leaves kept getting larger, shading the neighboring plants, and I had to keep dutifully cutting them back. But they looked healthy enough. Finally, in the last month, their heads became more compact. And then one day, I either grew tired of waiting, or they looked enough like real cauliflowers, that we both decided together it was time to pull them up and taste them at last.

Their varietal name is Amazing. But I would certainly not use that word to describe them. Maybe they are “AMAZING!” when grown out in the California sun or something. Or when grown with any real sun and wind. But under the LED lights in my little Tub Garden, they grew to be “PERFECTLY FINE!” Maybe even without the exclamation point. Oof.

They aren’t bad. They just taste like cauliflower. Like any old cauliflower you ever bought from a store. Maybe it was all the anticipation, but they just didn’t knock my socks off. For how much room they take up, and how long they take…all you get is one lousy head of totally average-tasting cauliflower per enormous, leafy plant. After 4 months of caring for and loving them, I’m not hot-to-trot to plant more Cauliflower any time soon.

Well hold on, now… that’s obviously crazy talk coming from me, because I am actually planning to do two of the really exciting cauliflower varieties soon. Have you ever seen those lime green ones that look like fractals? They are called Romanesco cauliflower and I have seeds for the very sexy-looking, Veronica Romanesco waiting in the wings. I also have seeds for the Cheddar variety, which is orange and, for lack of a less obvious word, cheesy-looking. So, I guess, don’t worry because I’m not done with cauliflower yet – as we have sexy and cheesy cauliflower to look forward to!

In fact, if you happen to be a cauliflower enthusiast and you’d like to grow one in your kitchen or your den or something, you can read more about my experiences growing cauliflower completely indoors in our Tub Garden.

I’ve mentioned this before, but one of the things I love about cauliflower – one of the things almost everyone loves about cauliflower – is that they really don’t have a strong taste. So you can use them literally millions of ways in the kitchen. Have you ever heard anyone recoil and say, “Oh I absolutely can’t stand the taste of cauliflower”? I don’t think there are any Facebook pages dedicated to hating them, like there is with poor, misunderstood cilantro.

I just got back from doing research to back that statement up…and I guess some people DO hate cauliflower. Man! The first thing I saw was a reddit site entitled “I fudging hate caulilfower”. Except they didn’t say “fudge”. People will hate anything!! Sheesh, I have got to stop making assumptions about people and their like, or dislike, of vegetables.

I think part of what people might hate about cauliflower, though, is that cauliflower is having a huge “moment”. Because cauliflower is gluten free, low-carb, mild- flavored, and a plant, it’s been getting a lot of day jobs. Over the last two years, it has become pretty much ubiquitous. Cauliflower rice, cauliflower gnocchi, cauliflower pizza dough, caulflower flour, cauliflower muffins, the list goes on and on. There even exists, according to the NYT article entitled “Ascension of the Cauliflower”, cauliflower chocolate brownies. Ok, that last one seems a bit excessive. Maybe I am starting to also hate cauliflower now for thinking it can do everything. What an over-achieving diva.

But, if you are trying to eat vegetarian, or just trying to be more plant-based with your diet, cauliflower is extremely useful. Back when we ate meat, we would make chicken tikka masala. Now that we can’t do the chicken part, what the heck else can we stick in there for the chicken, without grossing up the flavor? Especially if you don’t like tofu or tempeh too much…which I don’t. It’s the texture. Ick. So as we move away from meat, we are finding more and more that cauliflower steps in pretty nicely. Its supreme blandness doesn’t tend to offend the meal we are trying to make.

So…maybe these perfectly normal-tasting, bland, un-exciting cauliflowers don’t need to be the star of the show. Maybe they can just be the stage for the show. And we will cook them into awesome-ness.

In fact, what better way to zhuzh them up than to batter them in beer! Today’s recipe is based on the Crispy BBQ Beer Battered Cauliflower Nuggets, from the Half Baked Harvest. If you haven’t heard of this site yet, get right on over there. I know, it’s ok, leave my site and go. You’ll be glad you did. It’s written by Tieghan Gerard and she lives in a high mountain ski town just over the pass from me. I bet she can’t grow many vegetables there either because of our high-altitude seasonal limits. And also because she is too busy creating recipes for her beautiful cookbooks probably to care much!

What really blew me away about this recipe is the batter. You know how any time you are trying to bread something, the batter usually falls off and you end up with a bunch of fried breading stuff floating next to your naked fried item? Well this breading doesn’t do that, it actually sticks to what you are trying to bread. I think you might even to be able to use it for spackle or delicious tile grout. It’s pure genius.

So, thanks to Tieghan Gerard, we have actually achieved Cauliflower Awesomeness after all! In her recipe, she offers two cooking methods, either fried or roasted. In the spirit of experimentation, we tried it both ways. Not shockingly, the roasted option was healthier and the fried option was tastier. But the roasted ones were still pretty good and I think my family would go for them if the fried ones weren’t sitting right next to them. And if I hadn’t cooked the roasted ones so enthusiastically i.e., burned them.

I always think frying stuff is going to be a lot of work, but these turned out to be really quick. I’m not even sure why, but this was the easiest fry job I’ve ever done. Maybe because that spackle sticks on so well. And because the breading didn’t fall off into the oil, the oil stayed very clean, so I was able to put it back into a container (once it had cooled down) and we’ll be able to use it again to fry something else at a later date. Like more of these bad boys when the next round of cauliflower is ready for harvest.

I guess in the end, who cares if my Tub Garden cauliflowers didn’t taste amazing? They aren’t meant to be life-changing. They’re just cauliflowers. But they are cauliflowers we grew ourselves and loved and nurtured, and turned into a really nice meal. Without the sun! So that is good enough for me. It wasn’t a Cauliflower-Insane-Rainbow-of-Awesome-ness like I had hoped for, but we certainly did alright.

This recipe from the Half Baked Harvest is surprisingly easy, fast and delicious. Great for a weeknight summer meal or a vegetarian appetizer for your next Super Bowl party.