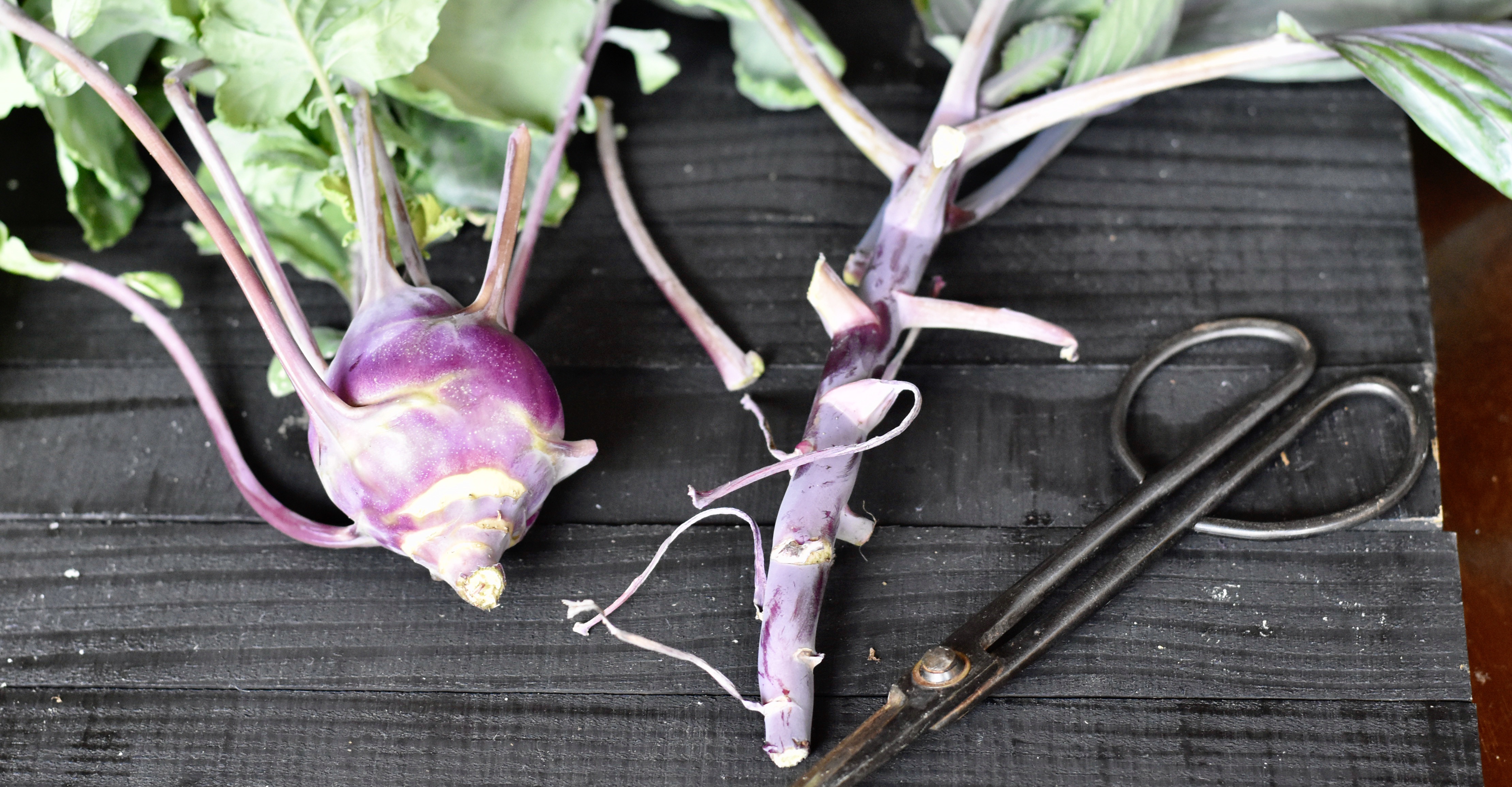 But I have never planted a kohlrabi. I didn’t know what they are, and I’ve certainly never bought kohlrabi seeds. So where did it come from? And what do I do with it now?

Almost everyone that writes about kohlrabi can’t help but point out that they look like an alien space ship. So maybe that’s how it got here – it got beamed in by aliens. Did this weird pod eat the celery I so carefully planted in that spot? Is it going to take over our house? Just to be certain, we pulled it up. We were going to eat it before it had a chance to eat us.

Now that I had a reasonable explanation for its presence in my garden, I could start asking the next level of questions. What is it? What do you do with it? And why did one form a weird bulb/pod and the other didn’t? Time for some research.

So what, exactly, is kohlrabi?

Per the internet, kohlrabi is apparently also called a German Turnip and is widely enjoyed in German-speaking countries. My mother IS a German so I called her up to see if she knew what the heck this vegetable was. You could hear my dad in the background, saying “What the hell is a Kohlrabi?” I guess I’m a chip off the old block.

She knew what it was. “Oh yes, I love kohlrabi! But they are hard to find here [in the US]. I remember we used to eat them raw.” I told her mine was purple and sent a picture, and she said she only remembered them being white, but mine “should still taste pretty good”. Later after some more reading, I texted her that my favorite German recipe websites suggested to cook it in a nice white sauce. She texted back one word: “RAW”.

So I tasted it raw as my mother suggested, and I’d say the taste is very similar to that of a broccoli stem, maybe crossed with a little bit of cabbage. But it’s a hint sweeter and milder than both. It has the texture almost of an apple, and it would be lovely as a crudite. Being mild, I can see why it also shows up in a lot of Indian cuisine. Its flavor would hold the spices nicely.

Lately, kohlrabi is getting more familiar to the general (non-German) public, as more farmers markets are making this odd little vegetable widely available. It turns out there are a whopping 22 varieties of kohlrabi to choose from. And they come in all sorts of colors and sizes – green, white, purple and even blue.

I think that ours must either be a Purple Vienna, Azur Star, Rapid or Kolibri variety. I think that because those are the varieties that are purple. And mine was purple. So, pretty good deduction on my part, I’d say.

Interestingly, the purple varieties are more resistant to insects and cabbage worms because they don’t like the purple leaves. Not too much of a concern in the indoor Tub Garden, but interesting nonetheless.

Kohlrabi is from the same species that includes cabbage, broccoli, cauliflower and kale – the Brassica oleracea species that started off as wild cabbage. Their leaves are edible and taste similar to the bulb, but with a little less crispness. They were supposedly cultivated in Germany by selecting artificially for the plants that grew that spherical, turnip-like shape. Another very fun fact is that there is a variety called ‘Gigante’ that grows to almost 10″ wide and is also known as “Superschmelz”. Feel free to work the word superschmelz into more conversations, as will I.

Why did one Kohlrabi form a bulb and the other didn’t?

I think this happened because they were planted fairly close together. I am obviously no expert since I am just learning about this space fruit now. But, you should ideally plant these guys at least 8″ apart. And the more space between, the better. They are “heavy feeders” so if they are too close, one will suck up all the water and nutrients and the other one will be a big ol’ dud. Maybe the big one sucked up my poor celery plant, too, in its haste. Apparently, kohlrabi aren’t usually recommended for container gardens for exactly this reason. They are pretty needy I suppose. But so odd-looking that maybe they are worth it.

What do you do with Kohlrabi?

All right, now that we know a bit more about growing kohlrabi, what the heck do you do with this thing? I can say without hesitation, the first thing you should do is peel it. The kohlrabi is surrounded by two distinct fibrous layers that don’t get any softer when you cook them. Seriously, It is like it is covered in popsicle sticks or something. Lot’s of fiber. By the time you get done peeling these little critters, you unfortunately have way less kohlrabi than you originally thought, so plan accordingly. On the upside though, they tend to last for a very long time in the fridge. Probably because of that popsicle stick coating.

So I peeled ours and tasted it and agreed with my mother that it was delicious. I just chopped ours up into little rectangles, which would also be a nice way to put kohlrabi into a coleslaw or stir-fry. Another very nice way to prepare the kohlrabi raw would be to slice it very thin, with a peeler, almost like you would do for a pear salad, and serve it with its own leaves mixed among the greens. You could also do these super fancy spirals with a peeler for a snack on its own, raw, with hummus and a little salt. But I decided to go a completely different way. Since nothing is ever made worse by cooking it in a white sauce, I cooked it in a white sauce. Like I thought a good German would do, but apparently doesn’t.

So here is how to make Kohlrabi in a white sauce, adapted from my mother’s own white sauce recipe. It is also similar to the one from my favorite little German recipe website that I mentioned above. Enjoy. And maybe serve it with some nice red cabbage and these fun little vegetarian frikadellen and a nice glass of German Bier.

During this experience I’ve learned a lot about growing kohlrabi. So I will definitely be prepared the next time these guys get beamed into my garden. But maybe I will actually just go buy some seeds and plant them on purpose. Because my mother did ask if I happened to have any left when she last came up to the mountains to visit. And whenever a she comes for a visit, words like superschmelz have a much higher chance of getting tossed around.

German Kohlrabi in a White Sauce

This easy white sauce can be used with almost any vegetable but is especially delicious with kohlrabi. No cream required.

If you, too, are researching Kohlrabi, I found this website especially to be very helpful.

Here is how to make our vegetarian potato-based german frikadellen.

Check out this post for our delicious, traditional german dinner pie. A family favorite.

2 thoughts on “Kohlrabi. What is this Weird Thing and How Did it Get Into My Indoor Garden?”