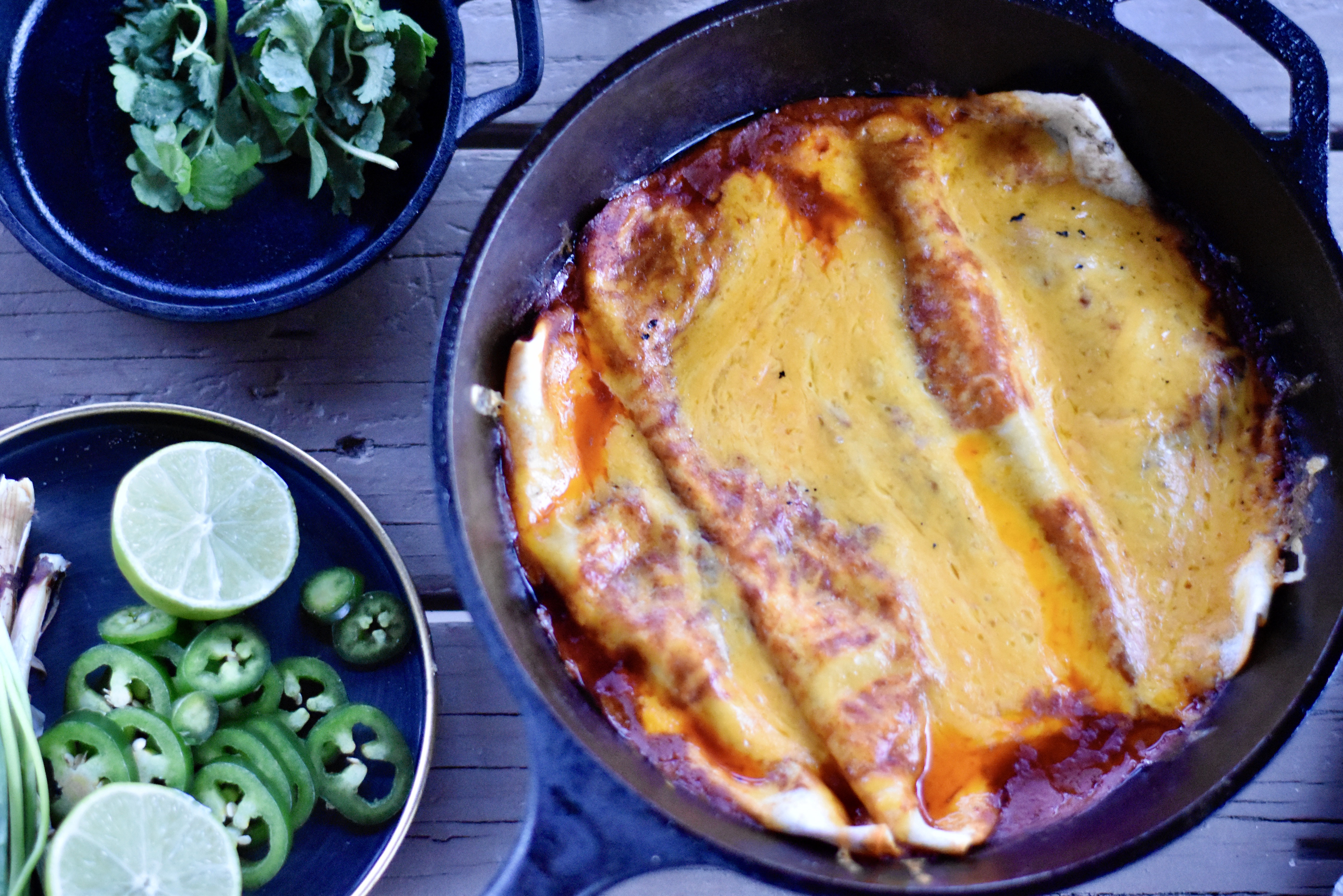 Gone fishin’ up in Montana on the Bighorn River!! We drove from our lovely free-stone river here in Colorado, to the tail-water river of the Bighorn near Billings, MT for a different style of fishing. And for “Cabin Life!” as the kids would holler. Over and over. And over.

I grew up camping. My parents would haul us all over Colorado, checking out remote places every summer weekend. My Dad would drive our Buick faux-wood-paneled station wagon up dirt roads with death cliffs on either side while I sat, in the back convinced we would all die in a fiery heap of melted tan station wagon. But, It was always worth it once we got to the camp site and out into nature. Man, I loved camping then, and I love it now.

I have learned over the years, though, that you don’t have to limit yourselves to Dinty Moore Stew and hot dogs when you’re camping, like my parents did. But hey, that was the 80’s, we didn’t know!

Now, when we camp (or cabin) we are always cooking up fun stuff like make-yer-own pizza over the campfire, or baking cinnamon buns and brownies in the coals. And we always have found a way to make good coffee, even in the wilderness. Even though you don’t have a kitchen, you can still be pretty creative and eat well. You just need a little planning and maybe a little inspiration from your indoor garden.

Speaking of the 80’s and faux wood panels…

The cabin was cozy (tiny) and rustic (dated) but there were clean sheets and hot water. We had each other, our rods, a campfire and that was all we needed.

But…we also managed to fill the truck bed completely with all the comforts of home. We brought bicycles, cookware, a tent for the kids to play in, monopoly, cribbage, my paint set, books and even our latte machine. “Roughing it”, this was not. But there was no TV, so maybe the kids thought we were roughing it. Of course, they were too busy shouting “Cabin Life!” at each other to notice.

Before we left, I harvested a few handfuls of veggies from the Tub Garden. I had planned out some meals based on what I knew was ready to be picked. We brought along a BUNCH of green onions, some of my non-bulbing yellow onions, basil, cilantro, a handful of green peppers and the first of our beautiful Black Krim tomatoes. One thing I knew for sure, this was going to be a green onion kind of weekend. Mouthwash optional.

After a ten-hour drive through endless prairies and western meadows, it was nice to get there and start a slower pace of life.

Our older son built his own fishing rod out of a stick, our younger son found a pile of wood to play with, my husband made campfires, and the cottonwoods rose above, giving us shade and breezes. The sunsets were glorious, we caught a heap of pretty fish and only one (gross) bottom sucker, and no one got bitten by a tick. We had it all.

But, this blog is called Tub to Table for a reason! It’s not about fishing or fishing cabins! It’s about bringing food from our indoor Tub garden up to Montana and cookin’ it over an open flame! Or a grill at least…

So here’s what we cooked over the weekend. They’re just some fun cabin menu ideas, if you get a few days away in a cabin and just happen to be a vegetarian. Who gardens.

If you cabin, or tent camp, or spend any time cooking outside – you should think about getting a cast iron dutch oven or skillet. You can get them at any army surplus store for pretty cheap, or you can get them at most outdoor sporting stores for a little less cheap. They’re certainly not for the extreme backpack camper though, because they are the heaviest piece of cooking equipment you’ll ever use. They’re like carting around a grandfather clock. Not something you want to lug very far. But if you are car camping, or cabin camping, they are the absolute bomb.

Breakfast. Chocolate chip pancakes. This was the one menu item that did not include green onions. It’s maybe not the healthiest start to the weekend, but we were going to be running around a lot and this was vacation! We like to use the Krusteaz Light and Fluffy Pancake mix because you only have to add water, perfect for camping.

It is so much fun to make pancakes in a cast iron skillet, especially over an open fire. They come out so nice and golden brown. We serve it with hot cocoa for a total sugar-high breakfast of champions. Our kids love them, eat their bellies full, and then sugar-crash at like 1 pm. Which is perfect, because then we can get them into the drift boat and they’ll tolerate fishing with us.

Dinner day 1. Vegetarian enchiladas. Because I brought that handful of yummy green peppers and green onions from the garden! Enchiladas are very forgiving and easy to cook over the grill.

We sautéed these Tub-grown peppers and onions in vegetable oil, then wrapped them up with cheese, spanish rice, and black beans into flour tortillas over enchilada sauce. Then, we doused them in more cheese and cooked them for a good half an hour on the grill. We served them with fresh Tub Garden cilantro and some way-too-hot jalapeños that scalded our every taste bud. Oh, and of course green onions for flavor (and extra halitosis) on top!

Breakfast. Pan fried home-fries. We simply cut up some russet potatoes, grilled them for about 20 minutes in butter, then served them up with sharp cheddar, sour cream, jalapeños, green onions and… a fried egg. Oh my.

Day 2 Dinner. Pasta with cherry tomatoes, cooked over the grill. Have you ever cooked pasta on a grill? It’s just a heat source like any other. And everything does seem to taste better when cooked on the grill or an open fire…why not pasta?

Next up was more chocolate chip pancakes for breakfast day 3 with hot cocoa. But let’s pretend we gave the kids healthy granola with milk. We didn’t, but I’m going to pretend that we did.

Dinner. Impossible burgers with loaded bake potatoes. These “burgers” smelled so good on the grill that one of the fishermen from another cabin sauntered over to tell fish stories and ask about them. When we told him they were vegetarian “impossible burgers”, he looked at us a little funny, took a pause, and then proceeded to tell us about the 40-50 fish he caught that day. So I guess we were good in his book. Or at least good enough to try his fish story out on.

The fully-loaded baked potatoes filled out the meal and was our last green onion inspired dish. But then I added some red onions to the topping and really solidified our position as the people to stay the farthest away from. We were social distancing heroes after that. Kissing my son goodnight, he said I should go brush my teeth.

This meal plan was based around what we had growing in the Tub Garden. But the real key to menu planning for camp or cabin trips is to figure out meals for which you can use the same spices and garnishes (i.e. green onions on everything) for most of the meals, so you don’t have to pack too much extraneous stuff. You know, so you have room for your paints, monopoly and latte machine.

And don’t forget to pack the boring stuff like can openers, lighters, your spices, and oils. You will inevitably forget this dumb but important stuff when packing your food. In fact, we just always keep the basics on hand, ready to go. We have small salt and pepper containers, a few spices, veggie & olive oils, balsamic vinegar, and syrup (don’t forget the syrup!)in a secure tupperware bin that also includes a heavy duty table cloth, a camp candle (for romantic ambience), cheap-o measuring cups, matches, bug spray, hand sanitizer, dishwasher soap, a small first-aid kit, aluminum foil and sunscreen. It makes it super easy to just up and leave for a fishing trip!

This trip to the Cottonwood Cabins in Montana was just what we needed. We hadn’t left the house since early March and it was JUST SO GOOD to get a change of scenery. If you get a chance to rent a cabin, or get some tent camping in, take it. You won’t regret it.

Unless your closest neighboring campers are cooking up every dish with onions. And they forgot their mouthwash.