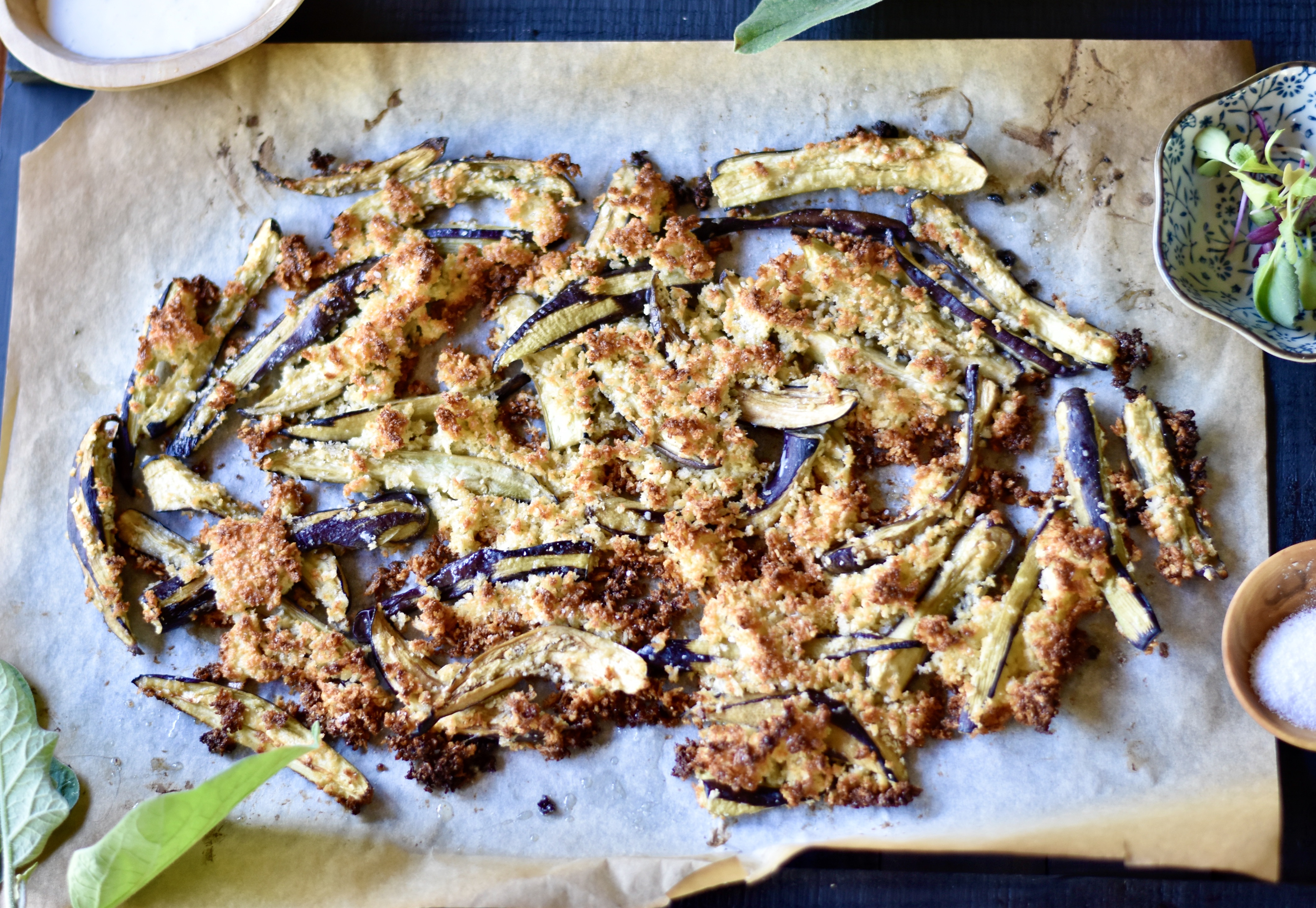 The first eggplant I planted in the Tub Garden just won’t die. I keep hoping it will die so I don’t have to actually murder it. But it just keeps pumping out smooth little purple fruits every three weeks or so, earning a stay of execution.

When I first planted it, I was just testing the waters. I wanted to see if ANY eggplants would grow in my indoor garden. Without reading the seed packet closely, I just tossed ’em in there and labelled it “eggplant”, thinking nothing would happen. Well it has grown, and it has thrived. But this plant is actually a mini-eggplant, so no matter how big and healthy the plant is, the fruits don’t get any bigger than about 3-4″ long and one inch around.

It’s the Hansel Eggplant, to be exact, by Johnny’s seeds. The plant itself has taken over a good corner of my valuable indoor space. But every time I think about clearing the whole thing out of there, it offers up another haul of these dark purple beauties and then I just don’t have the heart to whack it.

The problem is, my family “doesn’t really like the taste of eggplant”. So I have had to come up with some ways to make these little eggplants taste a little less eggplant-y and a little more palatable. Enter, the “French Fry Model for Making Any Vegetable More Appealing”, or, the FFMMAVMA. I’m thinking of using this technique any time a vegetable is a hard-sell in my house. Except maybe lettuce because fried lettuce just sounds gross.

The acronym still needs work, but the technique is pretty fool-proof. Take the vegetable in question, batter it, bread it, and then fry or roast it. Then serve it with ranch, ketchup, or marinara depending on the target eater’s age group. In writing this, I’m realizing I already FFMMAVMA’d a harvest of green beans and they were a total score.

The skin on these particular mini-eggplants is such a pretty shade of aubergine, but like many eggplant varieties, it is a teensy bit tough. Because the fruits are so small, the ratio of skin-to-fruit is a little lop-sided compared to larger varieties, and it ends up seeming like a lot of skin. So, per my husband’s suggestion, I used a peeler and skimmed off some of the skin like you would occasionally do to a cucumber.

It came off very easily – along with the eggplant’s most potent antioxidant, the anthocyanin nasunin. The dog and I both ate a couple of those skins right off the peeler, so the two of us probably will be experiencing antioxidant super powers this week. Actually, now that I think about it, the dog spit his out. Shoot, even our dog doesn’t like eggplants. Anyway, it was a compromise, but I figured this was a good way to get at least a portion of that healthy skin into my family’s bellies, instead of none at all.

The next step was to try to imitate a nice, crisp french fry. But, this had to be done differently than with a potato because an eggplant, by nature, will suck up pretty much all of the oil and flavors you throw at it. That is partly why it is such a great vegetable to cook with, but it is also why a lot of eggplant dishes get disappointingly heavy and mushy. So instead of throwing it straight into some hot oil and making a mushy mess, I microwaved it first. Wait, what?

There actually is a good reason to keep following me here…and his name is Kenji.

When my husband first became a stay-at-home dad, he became (to my delight) very interested in learning to cook. More than that, he wanted to learn how to cook things the right way. What sparked his interest was the very science-oriented writing at the Food Lab, a column (and book) on the site Serious Eats. J. Kenji Lopez-Alt is a chef-hero in our house. He’s an MIT grad and a recipient of a James Beard award. (Seriously, if you get a chance, read about the guy – he is pretty amazing.)

Those resources taught my husband (and me, along the way) more than just how to cook something, but also the science behind why certain techniques work for different applications. Over the last 7 years, those techniques have really paid off and my husband has a pretty intimidating knowledge base. In fact, if you read this post regularly, you’ll know my husband is the kind of guy who throws around words like mirepoix. And he even knows what it means.

So, naturally, I turned to our trusted Food Lab to see their take on how to not ruin eggplant. Using a technique from “All-American Eggplant Parmesan”, I decided to go with the microwave.

In that article, Kenji weighs a 24 oz slice of eggplant, and then weighs it again after placing it in a bowl of oil. Twenty minutes later, that eggplant slice weighs 46 oz. It has gained a whopping 92.3% of its weight in oil. The reason is, that

“like a sponge, [the eggplant’s} cells are held together into a very loose network with plenty of air in between. Before you can even think about cooking them, you need to figure out a way to remove that air.”

Kenji then explores several different ways you can de-air your eggplants, but the fastest and easiest way is with the microwave. You take the eggplant slices, lay them out between some sheets of paper towels, and simply zap them on high for three minutes. They become dry and soft but not leathery. Then, with the paper towels still in place, you press firmly on the eggplants to squash out any remaining air.

Now that we were successfully de-aired, the next step was to bread them. I did a pretty typical assembly line, coating them in flour, then an egg mixture, and then plopping them into a panko bread crumb/parmesan mixture. At this point, you could fry them and they wouldn’t soak up nearly as much of the oil as they would have before the air purge. Or you could roast them, like I did, for a slightly healthier option that’s still pretty good.

Out of the oven and scrumptious, or at least, “ok”

These mini-eggplant “fries” actually turned out GREAT. I loved them, but then, I love eggplant. And with the tougher crowd? They actually did ok. My boys ate them straight out of the oven with a dollop of ketchup and no complaints. The dog stole one off the counter and made short work of it. My husband didn’t get to try them until a few hours later when they were downright cold, and a bit on the soft side, but he said they were “ok”.

They were ok!! I’ll take that as a win for the FFMMAVA.

A yummy snack or side, and not too eggplant-y.