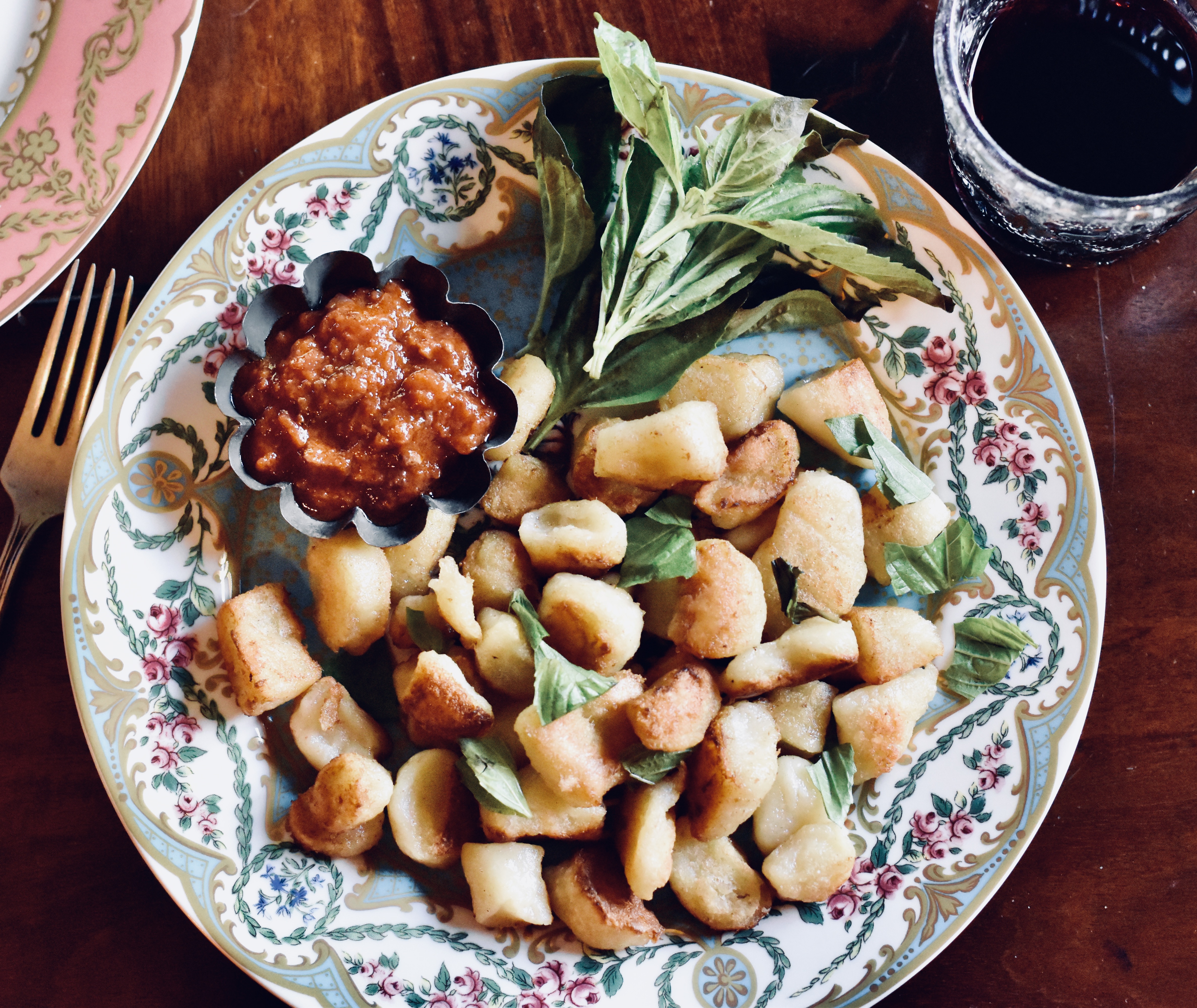 I’ve got two cauliflowers growing in the indoor garden right now. They are almost ready to harvest, but not quite. So I’ve been practicing this Cauliflower Gnocchi recipe a few times with store-bought cauliflower to get everything ready. It’s such an interesting way to use cauliflower, and such a healthy way to make gnocchi. I just can’t get enough of these tasty little things. I really am excited to try this gnocchi recipe with the home-grown stuff to see if it tastes even better. But, that’s a lot to ask because they’re pretty darn good to start with. And let’s be honest, cauliflower isn’t a real flavor powerhouse anyway. Isn’t it a successful vegetable because it’s delightfully bland? We’ll keep you posted if the home-grown ones do taste any better, but let’s just say I’m not holding my breath.

In anticipation of harvesting these benign beauties, I was scouring around for unique cauliflower recipes and I came upon this product, the Trader Joe’s Cauliflower Gnocchi. The website says these are made in Italy with 75% cauliflower, cassava flour, potato starch, olive oil and salt. Sounds easy enough, right? They actually are. And they are super yummy. Other awesome features of these little nuggets? They are gluten-free, have some fiber, and because they use cauliflower instead of potatoes they are lower in calories and carbs than regular gnocchi, per the Trader Joe’s website. (Normal gnocchi with potatoes have 230 calories per cup and 50 grams of carbs, the cauliflower version has just 140 calories and 22 grams of carbs.) I threw enough olive oil and butter in mine to probably counteract any health benefits, but man, they are good. And still healthier than a plate of pasta. Well, maybe.

I was surprised to see these Trader Joe’s Cauliflower Gnocchi actually have a pretty big presence on the internet and whole pages are devoted to recipes that make use of to them. For example, over at theModernProper.com, (a cool site worth checking out) their “Mushroom Alfredo Cauliflower Gnocchi” looks amazing. Along with that recipe, they also show five other fun ways to use the frozen gnocchi. And that’s not the only one. There are recipes for 20-minute Spinach and Artichoke Gnocchi, Pan-fried Caprese Gnocchi with Burrata and Beans, Chicken Parmesan Gnocchi Skillet. The pages just go on and on and most of them look really good. And they all are based on these Trader Joe’s Cauliflower Gnocchi. I guess they are an internet food darling. I was oblivious.

But, we don’t have a Trader Joe’s here. We have to go over the pass to get to one and sometimes that’s just too far, or the pass is closed. And, even if you do have a Trader Joe’s close by, these guys sell out pretty fast. So, doesn’t it seem prudent to learn how to make your own? Especially if you have some cauliflowers growing in the garden, almost ready to be harvested?

I wanted to get the recipe just right before using my long-awaited Tub Garden cauliflowers. And in fact, the first time I tried this, I made a huge mistake. I didn’t make enough. I ate most of them while preparing them and wound up with only about 3 to serve. So the next time I made them, I absolutely went for it. I quadrupled the recipe. Now I had enough to “sample for quality” during cooking and still have enough to serve for dinner. Plus, I even had enough to freeze a batch so I could use them later for one of those recipes I mentioned above. Brilliant.

We couldn’t find the cassava flour that the Trader Joe’s gnocchi use at our supermarket but my husband found Bob’s Red Mill Arrowroot powder and it turned out to be an excellent (and cheaper) substitute. Once I had the Arrowroot in my hands, I had to research some of these gluten-free flours and starches a bit to see what the heck to do with that Arrowroot flour and how much to use of it. Since I am not gluten-free, this was all pretty foreign territory. Of course, during medical school we learned a lot about how important a gluten-free diet can be for certain people, so I guess I found the topic overall pretty interesting. Feel free to skip ahead to the recipe if you don’t!

Arrowroot flour is made from the rhizomes of several types of tropical plants in the arrowroot family – traditionally Maranta arundinacea, but also Florida arrowroot from Zamia integrifolia. Cassava, or Manihot esculenta, is a woody shrub eaten for its edible root and is actually often mis-labelled as arrowroot. Though it is often called yuca in Spanish America and in the United States, it is not related to yucca, a shrub in the family Asparagacea familiar to us in North America. Tapioca starch actually is also made from the cassava root but only uses the starchy part of the root where cassava flour uses the whole root so has a bit more fiber in it. Then there is also the more common potato starch and corn starch too.

I thought so, too. I wanted to know how much to use of each flour or starch, and why and when to use each starch. So that’s where the research came in and I ended up compiling this table for other gluten-free newcomers like me:

Each starch has it’s best uses, based on these qualities. For example, if you want to thicken a dish and then continue to boil it for a long time, use corn starch because it can stand up to high temps. If you want to thicken a dish right before serving it, use potato starch because it thickens quickly at lower temps and won’t make your dish opaque or gritty.

The teaspoon equivalents are listed to help you figure out how much to use when substituting or experimenting. So, for example, if the recipe calls for 1 tsp of corn starch, use 2 tsp of arrowroot flour but 1 tsp of potato starch. These volumes are just a loose guide though, because it really depends on the recipe and what you’re using the starch or flour for. You might find that you need to add a little bit more or less based on how much you are trying to thicken or bulk up the recipe. So add conservatively first and build from there.

Now, back to the gnocchi…

If you are making traditional gnocchi, you typically use boiled potatoes, a little flour and a pinch of salt. Most recipes will also include at least one egg to help bind it all so they don’t fall to pieces during the boiling process. Traditional gnocchi aren’t the easiest things to make and they can easily get a bit rubbery or dense. The dough should be moist but not sticky, and it takes a few tries to get the right consistency and to get it to roll just right on the cutting board.

The dough in this GF cauliflower version is much more forgiving than the potato and flour version. In fact, I probably will never make a potato version again. The arrowroot flour and potato flour are more refined and lighter than normal flour, and the cauliflower binds it all together in a way that boiled potato just can’t. Basically, if you take the time to dry the cauliflower out as much as you can before you puree it, you’re on the road to success. Then, you won’t have to add tons of the flours to be able to work with the dough, and your gnocchi will be wonderfully fluffy and light, and taste just the perfect hint of cauliflower. Which, as stated before, is a delightfully bland and benign flavor.

We served ours with a little side of red sauce. Well, the first time I just wolfed them down in the kitchen. But the second time, we served them with a little side of red sauce. The third time, I might try to make some sort of veggie interpretation of this Cheeseburger Gnocchi. Or maybe we’ll just toss them in some butter and fresh sage, as Trader Joe’s suggests, because those will be made with the cauliflower heads from my indoor garden and probably taste like little nuggets delivered from the Gods themselves. Maybe.

This cauliflower gnocchi is totally addictive. You’ll probably want to double the recipe so some actually make it to the table.