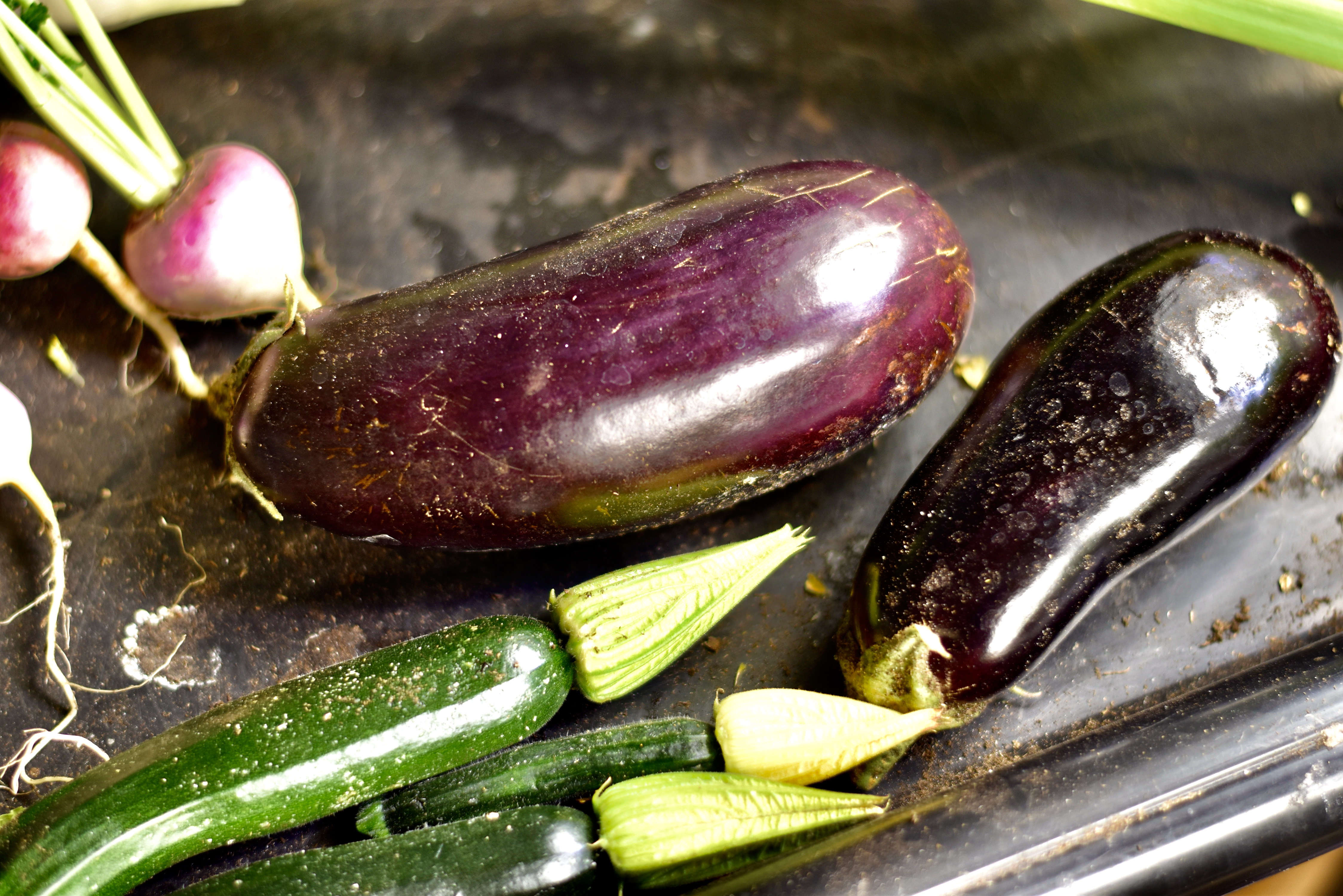 Can I grow Eggplants, from seed to harvest, indoors? To my surprise, yes you can, absolutely. Eggplant has been one of the easier vegetables to grow in the indoor garden.

Eggplant scored an “A-“ on our “indoor-garden feasibility” scale. Eggplant were, overall, very easy to grow in the indoor garden and took up relatively little space. Most importantly, Eggplant is one of those crops that seems to just keep producing. So you get a lot of vegetable for the space investment. Here is the Tub to Table guide to growing Eggplant, from seed to harvest, indoors.

Eggplants, also known as aubergine (english) or brinjal (asian), are in the nightshade family along with tomatoes and peppers. Even though it is considered a vegetable, it’s technically considered a berry (just like a tomato or cucumber). It is perennial, but more commonly grown as annual. The eggplant originated in India and Asia and typical prefers a warm climate with ideal temperatures between 70-85 degrees. It won’t set fruit if it’s too cold, or too hot. So, it’s kind of a picky vegetable. My hardiness zone here in the high rockies is 4b. There’s no way I’m growing an eggplant in the mountains, unless I’m doing it indoors. Eggplant might produce in as low as zone 5, but it is really a zone 10 kind of guy.

Honestly, the Eggplants were pretty happy in the indoor garden and didn’t require too much attention. They were as close to a “set it and forget it” vegetable we’ve ever had in here. They are a tropical plant, so indoor growing is actually a pretty small leap for them

Staking/Support. After you plant the seedlings, stake them right away so you don’t disturb the roots later. You’ll need to stake them so that when they become heavy with fruit they don’t fall over. So you might as well do it early. I was able to plant them fairly close together. As long as they were staked properly they didn’t crowd each other too much. My closest plants were a mere 6 inches apart, and grew very well in such close proximity !

Water. Do your best to water the eggplant from below such as with self-watering bins. Or, only water the base of the plant as any water on the leaves and fruits can cause them to mold. Eggplant was more resistant to mold and bugs than a lot of our other crops, but you can see in these close up pictures some of the leaves have tell-tale moldy brown spots.

Pollination. Eggplants do require pollination to get them from flowers to fruit. They have lovely little purple flowers that are star shaped just like tomato flowers, and just like tomato flowers, they can be hand pollinated. However, I found that just shaking their staking pole a few times a week to let the pollen shake about was more than enough to get the fruits to set. Yet another reason to stake them early!

Pick regularly and prune liberally for larger fruit. Once you have some fruit, make sure you don’t have too many fruit. Try to keep each plant to about 5-6 fruit so it can put all of it’s energy into making fewer, but bigger fruit.

Eggplant, again like tomatoes, are heavy feeders. Add some fertilizer into the soil and mix it well at about 6 weeks after seeding, and again when you first start harvesting fruits.

To harvest, cut them on the stem with a sharp, clean knife about an inch above the fruit. They won’t just pluck off, you have to cut them. Harvest them when they are shiny and unwrinkled. If they start to turn yellow they are most likely ripe and ready for harvest. Once they start turning yellow, they will get more tough and bitter.

Eggplants were kind of a long shot, I wasn’t really sure they would grow in the indoor garden because they are a bit of a finicky plant. I planted Black Beauties, Jaylo and Hansel (Which is a smaller variety). All three did well in the garden with relatively little fuss.

Since we became vegetarians last year, we have found more uses for eggplant at the dinner table. Because it absorbs cooking fats well, it can be very tasty and because of it’s texture, it is a rather good substitute for meat.

Verdict A-. Eggplants are easy to grow indoors. They take some room, but since they yield a continuous harvest, they are definitely worth it.

We’ve discussed how to grow it indoors, now here’s how to get it to your table!

After all that time and all that work, we had to do something special with the eggplant we grew in the precious Tub Garden space. So each crop of eggplant got their own special recipes…

Some of our favorites were these Mini Roasted Eggplant Fries.

And this novel take on an old classic, Crispy Eggplant Paremsan.

October 24, 2022Advanced String Theory. Trying out the “Lower And Lean” Method in an Indoor Garden.
Even though I am a …
March 9, 2022Indoor Garden Spring Update. Why Can’t We Just Have Whirled Peas?
Its mid-March here in the …
October 10, 2021Indoor Garden Fall Update
It's October in the Rockies …
June 17, 2021Spring Indoor Garden Update. Seems like We’re Settling into Quarterly Garden Updates Now…
I know it's been a …