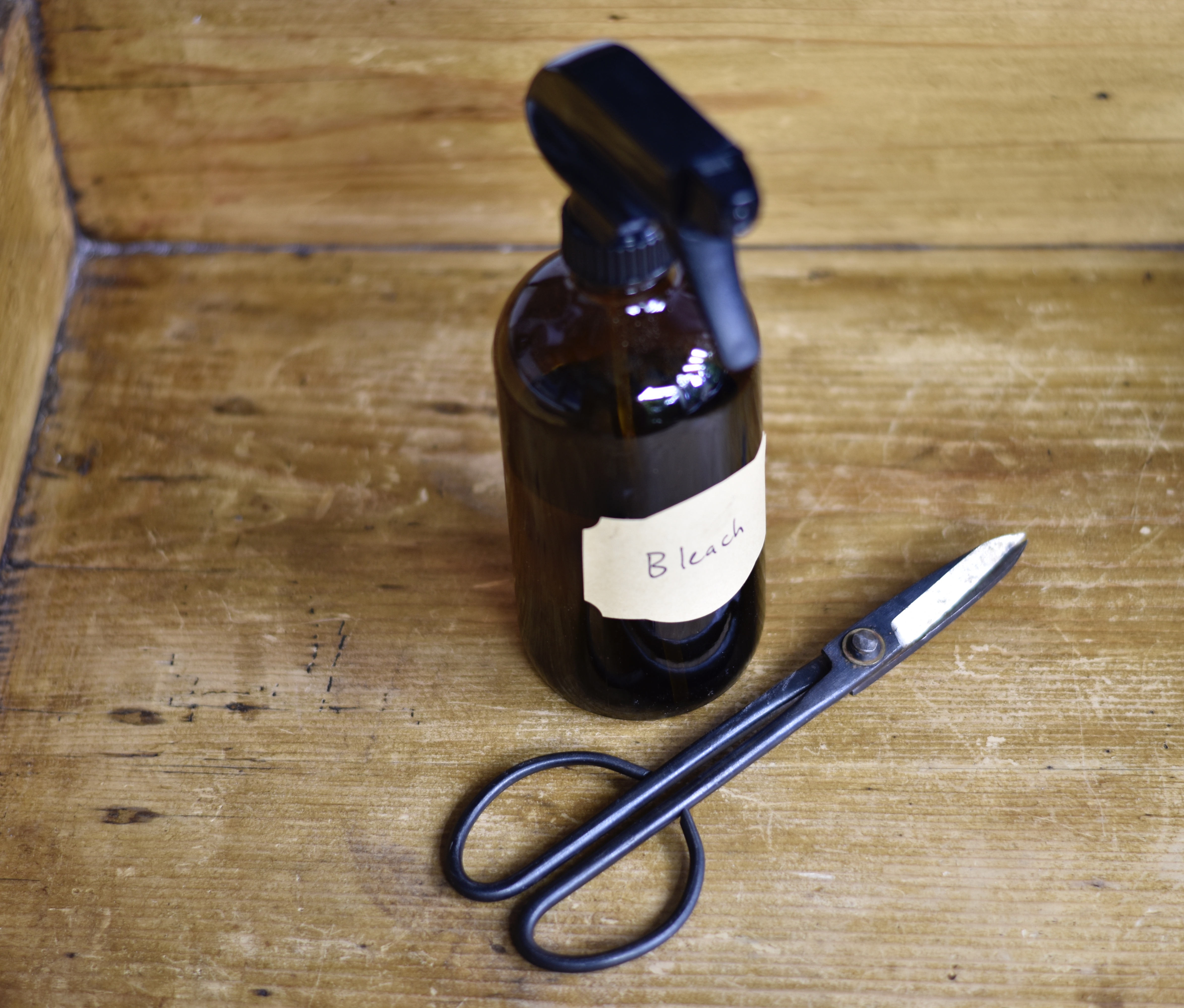 You may have noticed that I start all of my plants from seed. This was one of those “hard-earned lessons” I’ve spoken about. Any time I have been tempted to bring an “outside plant” in to my little garden, I have gotten burned. After bringing home some live roses from a garden store, I sprayed them off with water, left them outside for several days and inspected them carefully before bringing one of them in to the garden.  Sadly, a few days later I had a roaring aphid infestation and had to get rid of most of my plants.

I tried to uproot some dahlia plants at the end of an especially short summer and ended up with some very yucky night- time slugs that ate the surrounding plant roots in that container. Eww.

The particular problem with an indoor garden, and similarly a greenhouse garden, is that there are no natural predators to combat aphids, spider mites, or anything else that hitches a ride in. So once they get into your garden, they can be very hard to control. Additionally, because your plants are in tight quarters, they can spread very quickly. The best defense in this situation is a good offense. Strict aseptic protocols. Now, I have a very firm “no live plant” policy allowed in my indoor garden. Everything starts from seeds. This policy does limit me a little, I don’t get to do any more dahlia tubors or bare root roses. But it’s worth the limitations.

Additionally, I inspect my garden closely, at least every few days, for any signs of bugs, fungus, mold or anything abnormal. The second I see something “a little off”, I cut the affected leaves and toss them – or even pull the whole plant immediately if it looks compromised. I always have more seedlings ready to fill the spot so it’s not too much of a heartbreaker. I love my compost bin, but anything infected goes into the trash and out the door.

I also am sure to clean my gardening tools with a bleach solution after each gardening session. I mix about 1 tablespoon of liquid bleach into the 16 oz amber spray bottle, shake it before each use and simply spray down my tools after the session. That way I don’t get bleach on my hands. I also often wear rubber gloves when I garden so I don’t spread disease around. When you’re done, you can just turn them inside out a plop them in the trash.

That aphid infestation in my first year of indoor gardening was truly horrific. I tried everything to get rid of them. Back then I wasn’t growing anything that was going to be eaten – just flowers – so I was able to use a lot of the chemical solutions to pests. As you may have guessed, I didn’t have much success with them since I ended up pulling most of my plants.

I tried a diluted solution of Neem oil. Neem oil is an all purpose insecticide and fungicide safe for organic gardening. It is derived from the Neem seed, from the neem tree, other names for which include Azadirachta indica and Indian lilac. The garden stunk of Neem for days. Since it is an indoor garden, that meant the whole house smelled like Neem so that was unacceptable. And it didn’t kill the aphids.

I tried a dilute solution of olive oil and water. In contrast, the garden smelled amazing – like a pizzeria – but the aphids weren’t bothered at all.

I tried vacuuming the bugs off with my shop vac. That was highly effective, but way too rough on the plants and leaves. If I got close enough to suck the bugs off, the leaves suffered trauma.

Finally I tried the big guns. Bayer’s 2-in-1 Rose and Flower care. I was worried to let the children into the garden and actually didn’t let them in there for a week. The aphids receded a little, but the flowers themselves were done for. I pulled them all up that week and replaced all the soil. It was a sad day and I considered giving the entire indoor garden up.

I didn’t give up. Obviously. I planted again and despite being careful and using sterile technique I have still had to endure several infestations of different sorts since then. I have had aphids once, spider mites several times, and some small teeny tiny brown microscopic worms that I thought might be thrips. But I have never used any chemicals on my plants again. Not particularly because they smell bad, or seem dangerous, or especially since now I am growing food. But because I haven’t needed to. The garden is small and convenient to peruse often, so I can be vigilante and stop any infestation EARLY on. And now all I use is a spray bottle of water. That’s it. I spray any bug or mite the heck off my plants with a pretty good jet stream. If you do this a few days in a row, not much is going to be able to hang on and destroy your plants. If, after a few days, the plant still is infested, then out it goes. Into a trash bag and out of the garden. And that is that. You have to be ruthless but that is your best shot to save the rest of your plants.

Just be sure you label your water bottle so you don’t accidentally spray all your plants with bleach. That experiment probably wouldn’t go well. Just a hunch.

March 9, 2022Indoor Garden Spring Update. Why Can’t We Just Have Whirled Peas?
Its mid-March here in the mountains, and we're about two weeks into …
October 10, 2021Indoor Garden Fall Update
It's October in the Rockies and the leaves have gone gold and …